Jonde is presented in the Baluarte under the direction of Pehlivanian

Jonde is presented in the Baluarte under the direction of Pehlivanian

JONDE is presented in the Baluarte under the direction of Pehlivanian

After a somewhat cold reception in the Baluarte, the Spanish National Youth Orchestra (JONDE), along with a warm performance by trumpeter Manuel Blanco and a resounding “Leningrad” under Pehlivanian’s baton, managed to spark off the enthusiasm of the audience.

The Concerto for trumpet and orchestra by the Armenian composer Alexander Grigori Arutiunian immediately aroused attention, and from the very first measures a wave of energy began to spread through the hall. It does it at alternating current: if the more folkloric rhythms pinch you on the surface, the slower melodies caress your deepest emotions. The harmony between the soloist, orchestra and conductor is perfect: the dialogue between the trumpet and the other instruments is either an imperceptible overlap of sounds (notes almost whispered), or alternatively a wearing of the singer’s voice to a rhythm of pasodoble. If already by itself, the execution of this score showed the masterfulness and sensitivity with which Manuel Blanco modulates the forts and pianos, the bis that he offered below (Oblivion de Astor Piazzolla) left him without any doubt. Without the need to have much imagination, the spectator who closed his eyes could see two dancers moving sinuously to the sound of that tango.

After the break, the Spanish National Youth Orchestra resumed the concert with Symphony No. 7 that Shostakovich composed in 1941 to describe, in a sonorous way, the German siege of Leningrad during World War II. Pehlivanian could not make it better interpreted. For the execution of the first movement (which in the composition picture represents the moment when the Soviet city went from living in peace to being the object of a military attack), the conductor deployed all his strength to express the drama of the situation. Fantastic the “super-controlled uncontrol” with which the crescendo repetitions of the measures that symbolize the German army’s approach to the city were carried out. Starting with an almost inaudible drumming sound (so much so that you could hear the noise of a caramel unrolled), the pizzicato of string instruments were added to the other instruments to create such a thunderous sound that it was not hard to associate it with the thunder of a war. As for the first part of the concert, Pehlivanian’s direction managed to bring the sound to life, as if it were moving in the hall, involving and kidnapping the spectators.

Overwhelmed by the power of this first part, the beginning of the second movement gave us a break with the rhythmic passage of the strings and the solo of the oboe, to throw us back into the anguish of memories (the central theme of this part of the score). Despite the intensity of the sound created by the wind instruments and percussion and the desolation that can be suggested by the solo of the contrafagot, the main characters of this second part were the string instruments, which were able to express both the feeling of relief (with sweet sounds and slow rhythms) and those of the trauma of the violence suffered, with high-pitched -almost metallic- sounds and fast rhythms. A very marked alternation that Pehlivanian also wanted to underline in the execution of the third and fourth movements, in which there were moments of tension that characterized the first movement. The conclusion of the symphony was played by percussion, which caused the audience to vibrate.

For their part, the orchestra demonstrated not only a very high level of professionalism, their playing was excellent and showed great rapport, but also the enjoyment of the concert. The audience ended up surrendering to the enthusiasm that Blanco, Pehlivanian and the Youth Orchestra left in the Baluarte. 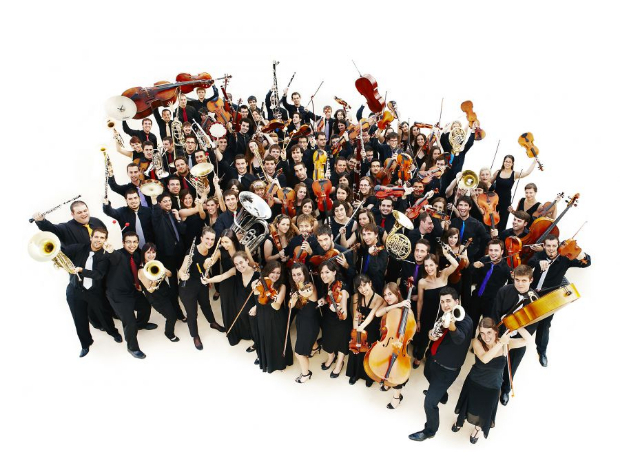